Interventional radiology (IR), or Vascular interventional Radiology (VIR) or Interventional Neuroradiology (INR), is a new specialty that has been responsible for major recent medical advancement. It is at the forefront of medical technology and innovation. Although IR is less well known by GPs, IR is typically referred to as the specialist’s ‘specialist’. It is responsible for image-guided minimally invasive procedures and therapies you may have thought more usually carried out by surgeons. IR is a minimally invasive alternative to open surgery that uses radiological image guidance  (X-rays, ultrasound, CT and MRI) to aid treatment. In many circumstances, surgery can be avoided and the risks to the patient can be lowered with faster recovery times. IR can also be used as an adjuvant to surgery and combined procedures with surgeons can optimise patient care. 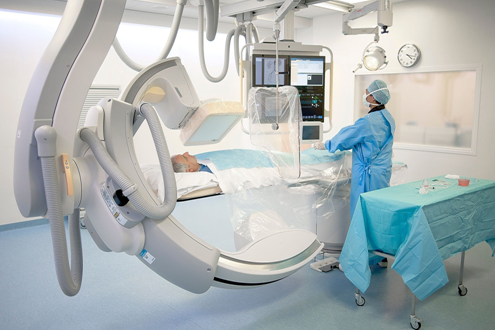 When did IR start?

IR developed in diagnostic angiography in the 1960s, after the Seldinger technique was described by Dr Sven-IvarSeldinger in 1953. The technique described used a hollow needle and guide wire to access a vessel.

An American radiologist, Dr Charles Dotter, altered the course of cardiovascular interventional radiology in 1964 and is considered the father of IR. He modified the Seldinger technique for therapeutic purposes. On 16 January 1964, IR was born when Dotter percutaneously dilated a tight stenosis of a femoral artery, using a plastic tube (catheter), in an 82-year-old lady with painful leg ischaemia and gangrene who refused amputation. Following this, despite scepticism from his surgical colleagues, the leg pain ceased, she started walking and her leg improved.

Dr Charles Dotter was nominated for the Nobel Prize in Medicine in 1978. The term ‘interventional radiology’, however, was not conceived until March 1967 when an American radiologist, Alexander Margulis, described it in an edition of the American Journal of Roentgenology.

What skills do interventional radiologists (IRs) have?

IRs have expertise in guiding small needles, catheters and other medical equipment into the body through tiny (5–10 mm) incisions in the skin to treat disease. The treatments performed are truly minimally invasive. However, the basic skills of an IR are still image interpretation and, therefore, core diagnostic radiology is at the heart of interventional radiology training. This combined skill has meant that there is hardly any area of hospital medicine where IR has not had an impact on patient management.

What can IR treat?

You may be surprised to know the extent of therapies now performed predominantly by IRs. Traditionally surgeons performed a lot of these procedures, although a significant amount of treatments are new and innovative. Virtually all body parts and systems can be treated using IR techniques.

However, broad categories of treatments available include:

Patient safety IRs pioneered the safe and high-quality procedures and standards for performing minimally invasive therapies, with a concentration on patient safety. IRs are specialists of radiology, who have completed further education and training in diagnostic radiology and interventional radiology including radiation safety, radiation physics, the biological effects of radiation, injury prevention and clinical practice.

What are the advantages of IR?

It has a number of benefits for patients

Can we be referred directly to an IR?

The answer is yes. IR is a progressive specialty and is developing at a fantastic speed. Most IRs offer direct referrals from your GP with no need to be seen by another specialist (traditionally a surgeon). IRs often run outpatient clinics and have access to day-case beds if you need a simple procedure. IRs typically work as part of a multidisciplinary team within hospitals, so are able to refer you to another team member if it is appropriate. IRs are happy to discuss patient management with your GP if they need advice. Milestones of IR You may be surprised to learn of the advancements in medicine that have been primarily down to IR innovation.

What are important milestones Pioneered by Interventional Radiologists?

You may not even have known that IR had been involved. Here are milestones of IR.

1967 The Judkins technique of coronary angiography, the technique still most widely used around the world today

1967 Closure of the patent ductusarteriosis, a heart defect in newborns of a vascular opening between the pulmonary artery and the aorta

1972 Selective arterial embolization for GI bleeding, which was adapted to treat massive bleeding in other arteries in the body and to block blood supply to tumors

1980 Development of special tools and devices for biliary manipulation

1990’s Treatment of bone and kidney tumors by embolization