What is Carotid Artery Stenosis or Carotid Occlusive Disease?

Carotid Artery Stenosis, also called Carotid Occlusive Disease, is a condition in which one or both of the carotid arteries becomes narrowed or blocked. It is a serious condition that increases the risk of stroke if left untreated.

The carotid arteries are located on either side of the neck — you can feel your pulse quite strongly there by pressing your fingers against your neck below your jaw, to the side of your voice box. Just above the pulse point, the carotid artery branches into two smaller vessels, called the internal and external carotid arteries. Healthy, unobstructed carotid arteries are the critical pathways that supply freshly oxygenated blood from the heart to the brain. When those arteries become narrowed or blocked by plaque, not enough oxygen gets to the brain.  The plaque may also break off into small pieces (emboli) that can travel into smaller vessels in the brain and lead to stroke. The area where the main carotid artery branches is a common location for a blockage.

If an artery becomes completely blocked (which is called carotid occlusion) or if piece of the blockage breaks off and travels to a smaller vessel where it completely blocks blood flow, a part of the brain may be completely deprived of oxygen, leading to the destruction of brain tissue. This is what happens during the event we call a stroke, or a “brain attack.

There are nearly a million strokes each year in the India, and its leading cause of death and disability. Stroke claims significant livesand half of those fatal strokes can be traced to carotid occlusion.

A partial blockage, where one of both carotid arteries becomes narrowed, is called carotid stenosis.  The carotid arteries are large enough to allow good short-term blood supply even when they start to narrow, and other arteries sometimes expand to compensate for the reduced flow, but carotid stenosis can still cause a  stroke or a transient ischemic attack (TIA). The larger danger of carotid stenosis is that a piece of the atherosclerotic plaque will break off and completely block an artery in the brain, which can also result in a  stroke or TIA.  A TIA, sometimes called a “mini-stroke,” can cause temporary neurological deficits and is an indicator of an increased risk of a future stroke. A mini-stroke is often small enough to be overlooked or dismissed, but it’s a warning sign that should not be ignored. 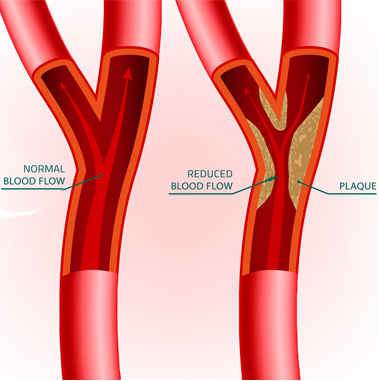 The usual culprit in the narrowing of the carotid arteries is the buildup of atherosclerotic plaque, which is made up of fatty material and blood platelets, along the walls of the blood vessel. That buildup can damage the artery walls, which then narrow and harden. A piece of the fatty deposit may also break off and travel to a smaller artery in the brain; causing a blockage (the breakaway blockage is called an embolus). Contributing factors for plaque buildup include high cholesterol, high blood pressure, diabetes, smoking, and obesity. Carotid occlusive disease also has a family component, so having a family history of stroke increases your own risk.

What are Symptoms of Carotid Occlusive Disease?

A primary care physician may detect abnormal blood flow in the neck that indicates the possibility of carotid stenosis — a vigilant physician will be especially mindful of the risk factors above when listening to a patient’s carotid blood flow.  This turbulent sound, called a “bruit,” may be heard through a stethoscope during a routine examination. If the physician hears a bruit, the patient is usually referred for ultrasound imaging of the carotid arteries.

If carotid occlusive disease is not detected during a routine exam, it may reveal itself with a neurological episode called a transient ischemic attack, or TIA, often referred to as a “mini-stroke.”

Symptoms of a full-blown stroke are similar to those of a TIA, but are more severe and longer in duration (not resolving within 24 hours). A stroke is not always caused by carotid occlusive disease, but often is.

What are Symptoms of a mini-stroke or TIA?

These symptoms are usually short-lived, resolving themselves within a few hours. They should not be ignored, however, as they are often an indicator of advancing carotid stenosis and are a major risk factor for a future stroke.

How to Detect or Diagnose Carotid artery stenosis?

An individual suspected to have carotid stenosis, or who may have had a transient ischemic attack (a TIA, or “mini-stroke”) is first assessed with a thorough physical examination. This examination can reveal specific neurological, motor, and sensory deficits that can provide clues about both the extent and location of an occlusion.

Someone who has had a TIA may have only vague symptoms, including high blood pressure, weakness or numbness on one side of the body, changes in motor skills, or confusion. A doctor performing an assessment will look at the patient’s eye movements, pupil reactivity, tongue movement, and shoulder elevation – these all help evaluate the status of the cranial nerves. The doctor will also evaluate attentiveness, language, and other elements of mental status.

These three tests are noninvasive techniques that can reveal evidence of carotid occlusive disease or carotid stenosis. If the tests confirm the presence of a blockage, the patient will require treatment.

What is medical treatment of carotid artery stenosis?

Depending on the extent of the stenosis, the treatment plan may begin with medications to treat the underlying causes:

More advanced cases, or individuals whose disease can’t be controlled with medication, will be evaluated for endovascular treatment including carotid angioplastyand stentingto restore healthy blood flow through the artery.

What is Endovascular treatment of Carotid Artery Stenosis?

The goal of Endovascular treatment for carotid occlusive disease is to restore good blood flow to the brainby reopening the artery to a healthy width. Sometimesit is performed on an emergency basis, when the patient has had a stroke and the blockage must be removed immediately. Options for endovascular treatment include angioplasty and stenting.

Carotid angioplasty, also called balloon angioplasty, is a minimally invasive procedure in which a small catheter is inserted into an artery in the groin and threaded up to the carotid artery. A tiny balloon on the tip of the catheter is then inflated, widening the artery at the spot where it’s narrowed or blocked. Angioplasty is also used to place a stent in the artery.

Carotid artery stenting involves the placement of a small self-expanding stent (tube) inside the narrowed artery. The wire-mesh stent is threaded up to the carotid artery from the groin, and is expanded once it reaches the blockage. The stent holds the carotid artery open to a sufficient width to allow good blood flow to the brain. A stent is usually placed as part of a carotid angioplasty.