What are Spider Veins?

With a diameter of less than 1 mm, spider veins are the miniature versions of varicose veins. The dilated, small veins lie within the skin and not beneath it like the large varicose veins. For this reason, the spider veins can be seen shimmering clearly through the skin, particularly in fair-skinned people. They can be found anywhere on the leg, but appear particularly frequently on the outer side of the lower leg and thigh and the inner side of the knee.

Spider veins may be bluish or reddish-purple in color and have a dotted, stripy, fan-shaped, or star-like (starbursts) appearance. They may occur singly or in clusters and, in the worst cases, extend over a relatively large area on the leg.

A particularly severe form of spider veins on the foot is called corona phlebectatica. These spider veins are considered to be an early sign of advanced vein disease. A person with this condition should see a doctor without delay. 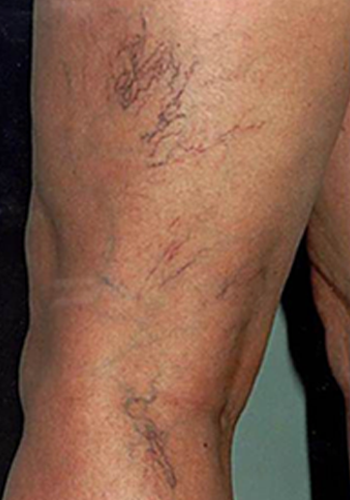 What are Reticular varicose veins?

Reticular veins tend to form a fan-like or netted appearance and, like spider veins, are often found on the sides of the upper and lower leg.

In technical language, both spider veins and reticular veins are classified together in one group as C1 varicose veins. C1 covers the mildest form of varicose disease, generally considered as a cosmetic problem rather than a medical one.

What are Symptoms of Spider Veins?

The most noticeable sign of spider veins is their appearance on the skin. In most cases, there are no symptoms present and spider veins are considered to be harmless and not usually considered a health risk. But on occasion they have been known to have some minor symptoms which might include things like:

It’s important to seek medical attention if the veins feel warm to touch or are tender; or if you develop ulcers or sores on the skin.

Spider veins result when the valves in the veins become weak or damaged. If the valves cannot or do not open up properly to allow blood to freely flow in and out, blood starts to back up and the veins will swell. There can be several factors that increase the risk of developing the condition. Examples include:

How to Treat Spider Veins?

Although they serve to relieve the symptoms, none of these conservative measures actually eliminates spider veins. Conservative treatment is therefore usually employed as preventive measure or to support other forms of treatment. 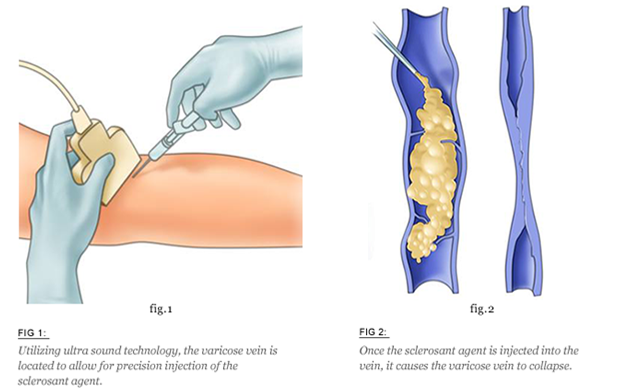 In micro-sclerotherapy, the doctor uses a very fine needle to inject a specially developed medicinal product, the sclerosant, directly into the spider veins and small varicose veins. Inside the diseased vein, the sclerosant reacts with the vein wall. Natural processes cause the walls to stick together, thus closing off the diseased vein. The body gradually converts this vein into a strand of connective tissue by a process known as sclerosis. With time, the connective tissue strand is gradually broken down until it finally disappears.

Foam sclerotherapy involves the injection of special sclerosant foam into the spider veins instead of a liquid sclerosant.

In principle, spider veins on the legs can also be treated with a particular type of laser (Nd:YAG laser). However, laser therapy is only successful when the spider veins are small, not very pronounced, and when there is no inflow from deeper-lying veins. The reason for such limitations is that the penetration depth of laser beams is not sufficient to reach and obliterate any deeper-lying diseased veins. For effective treatment, however, it is essential to treat these more deeply lying veins as well, because the spider veins will otherwise reappear again and again.

Often ineffective; the penetration depth is not sufficient to reach reticular varicose veins
Can only be used to treat fine, small spider veins without an inflow from deeper-lying veins

Laser beams are electromagnetic waves that strike human tissues as strongly bundled beams emitted from the laser device. Depending on the duration and intensity of the exposure, the thermal effects that can be seen range from slight warmth to charring of the tissues.

When the laser beam penetrates to a sufficient depth, haemoglobin (which gives the blood its red colour) in the spider veins absorbs the laser light and converts this energy into heat. The blood is sort of boiled and clots. The thermal action damages the inner layer of the vein walls and causes them to stick together at these points. However, the effects of laser therapy are seen only at the points where the bundled beams meet the tissues. This means that, under cooling, the skin of the spider veins must be (repeatedly) treated with the laser at intervals along their entire length; the points of application have to overlap in order to obliterate the whole blood vessel. If the overlap is too great, the heat generated may damage the skin. If the points of application are too far apart, the diseased vein may not stick together along its whole length, leaving open segments of the vein filled with blood. Parts of the spider vein will then remain visible.

Successful laser therapy results in the formation of a connective tissue strand that is resorbed into the body after a few weeks or months.