What is brain Aneurysm?

An aneurysm begins with a weakness in the three-layered wall of an artery, often at a point where a blood vessel branches into two or more smaller arteries. Blood flowing past the weak spot puts pressure on it and causes the artery to bulge and swell. The sac that bulges out from the artery, or the swollen area of the blood vessel, is called an aneurysm.

Aneurysms can occur anywhere in the body, but they are most dangerous when they occur in the aorta (called aortic aneurysms) or the brain (cerebral aneurysms). Cerebral aneurysms are sometimes called intracranial aneurysms, or simply brain aneurysms.

There are several types of cerebral aneurysm:

Just as a weakness in the sidewall of a tire can get worse over time and lead to a blowout, a cerebral aneurysm can continue to weaken the wall of the artery and eventually lead to a rupture. A rupture often happens without warning, but sometimes the aneurysm can begin to leak in advance of a full rupture, which may allow time to repair the aneurysm before it’s too late.

Not all aneurysms rupture, just as not all damaged tires blow out. But to have an aneurysm is to have the potential for a rupture, so any aneurysm requires careful evaluation to determine the degree of risk. 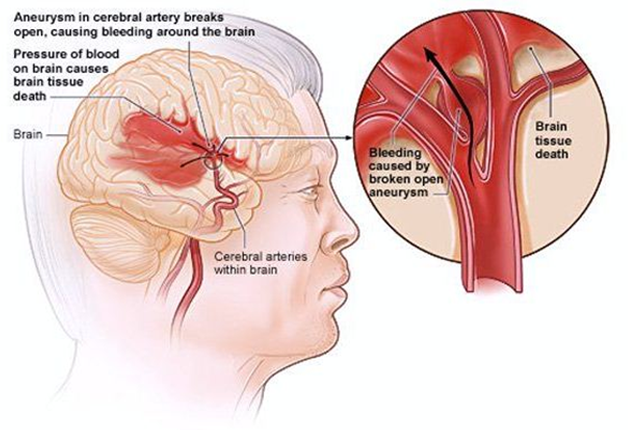 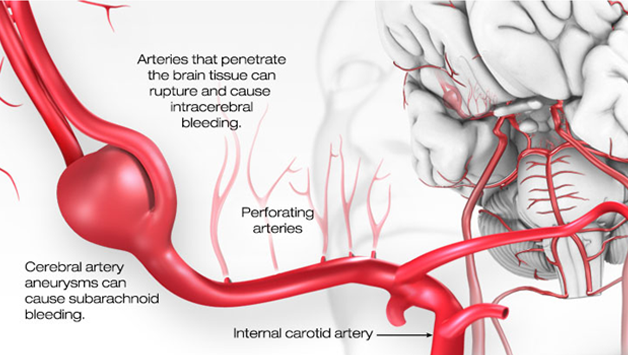 What Are the Risks of Brain Aneurysm?

The risk of a rupture is largely dependent on the size and position of the aneurysm. For example, a small aneurysm at the front of the brain carries a very low risk of rupture; a larger aneurysm located at the back of the brain carries a higher risk. The risk of aneurysm rupture is greatest between the ages of 55 and 60, even though the aneurysm itself may have been present for many years.

If a cerebral aneurysm ruptures, the bleeding in the brain is called a subarachnoid hemorrhage, which is a life-threatening emergency that requires immediate treatment. Subarachnoid hemorrhage is responsible for almost one fourth of all deaths due to nervous system disorders.

A cerebral aneurysm may grow without rupturing and will press on the surrounding brain structure or nerves. This is called “mass effect” and is specific to certain locations (such as a posterior communicating artery aneurysm compressing a nerve of the eye and giving double vision) or happens with large and giant aneurysms.

Finally, a cerebral aneurysm can also foster the development of blood clots within it, and causes a stroke if the blood clot breaks away and creates a blockage in a blood vessel in the brain.

What causes a brain Aneurysm?

The arterial weakness that allows an aneurysm to appear develops with age. Smoking and hypertension are significant risk factors for developing aneurysms, since smoking stiffens the arteries and high blood pressure puts extra stress on them.

There is some evidence that having a relative with an aneurysm increases your own risk of developing one. In some cases, an infection or injury may cause the arterial wall to weaken, creating the opportunity for an aneurysm to develop.

Some people have aneurysms and don’t know it — they may have no symptoms, or mild symptoms that they don’t recognize as being a sign of a serious condition.In fact, although significant numbers of patients suffer a ruptured aneurysm every year, there are many others who have aneurysms but don’t know it.

How to diagnose brain Aneurysm?

In some patients without symptoms, an aneurysm may be detected on a scan that was done for another reason – this is called an incidental finding, and it often comes as a shock to the patient. The patient should be referred to aninterventional Neuro-radiologist to confirm the diagnosis and for further evaluation.

In other cases, a patient reporting symptoms of an aneurysm may undergo one of these diagnostic tests at the direction of a primary care practitioner or an interventional Neuro-radiologist:

These images may be used to detect whether an aneurysm is present. If an aneurysm is found, the imaging tests can help determine its location, size, and shape, all of which contribute to the risk of rupture. Based on that degree of risk, the interventional Neuro-radiologist and the patient will discuss the options for treatment.

What are Treatment options for brain aneurysm?

If there is little risk of rupture in a healthy, asymptomatic patient, the interventional Neuro-radiologist may recommend a medical approach rather than a surgical one. In the nonsurgical approach, the aneurysm will be monitored while the patient undergoes medical treatment for one of the contributing factors (such as hypertension or high cholesterol), or commits to the lifestyle changes necessary to reduce risk (such as quitting smoking or breaking an addiction to drugs or alcohol).

If the aneurysm appears to be at risk for rupture, however, the interventional Neuro-radiologist will likely recommend anendovascular approach.

The greatest risk factors for rupture are:

Theinterventional Neuro-radiologist will also consider the age and overall health of the patient, as well as medical and family history, before making a recommendation. Because the consequences of a ruptured aneurysm are so severe — stroke, coma, and even death — most patients at risk for a rupture will be referred for Endo-vascular intervention.

It is minimally invasive procedure and more suited for patients who cannot undergo a major surgery. With ‘coiling’, the interventional Neuro-radiologist will insert a small catheter (tube) into an artery in the groinand advance this through the arterial circulation into the aneurysm under image guidance. Once here, a thin metal wire is pushed into the aneurysm, where it ‘coils’ into a closely packed ball. This is left here, and the catheter removed. The metal coil agitates the blood, triggering a clot to form around itself, which effectively seals the aneurysm off from the circulation.This heals the aneurysm and virtually eliminates the possibility of future rupture. A patient typically stays in the hospital only one day after coiling of an incidental aneurysm before being discharged home.

Flow diverters have been developed to treat intracranial aneurysms.These endovascular devices are placed within the parent artery rather than the aneurysm sac. They take advantage of altering hemodynamics at the aneurysm/parent vessel interface, resulting in gradual thrombosis of the aneurysm occurring over time. Subsequent inflammatory response, healing, and endothelial growth shrink the aneurysm and reconstruct the parent artery lumen while preserving perforators and side branches in most cases. 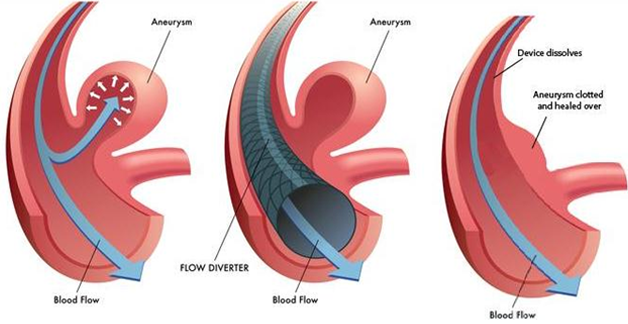 The skull is opened up, the aneurysm is found, and then ‘clipped’ with a metal clip. This cuts off the blood flow within the aneurysm, sealing it off from the arterial circulation.  It will then wither over time. It can be really technically challenging for neurosurgeons to reach a brain aneurysm. They must operate tools in a confined space with limited visibility, and successfully clip it without cutting off blood flow to the brain.

Sometimes a combined surgical and endovascular treatment may be used for complex aneurysms. The two approaches are used to complement each other for the safe obliteration of the aneurysm.

Once an aneurysm has ruptured, the goal is to seal off the aneurysm from the rest of the circulatory system to prevent a re-rupture, and preserve brain function. In addition to endovascular treatment, patients are often given medication, including painkillers, anticonvulsants, and antifibrinolytic agents to stop bleeding.

Subarachnoid hemorrhage associated with aneurysmal rupture has a high mortality rate — 8 to 15 percent in the first 24 hours and 66 percent by 1 to 2 months after rupture.