Dural carotid-cavernous sinus fistulae are characterized by a communication between the cavernous sinus and one or more meningeal branches of the internal carotid artery, external carotid artery, or both. These fistulae usually have low rates of arterial blood flow and almost always produce symptoms and signs spontaneously, without any antecedent trauma or manipulation. The lesions may represent congenital arteriovenous malformations, which develop spontaneously or in association with atherosclerosis, systemic hypertension, collagen vascular disease, pregnancy, and during or after childbirth. 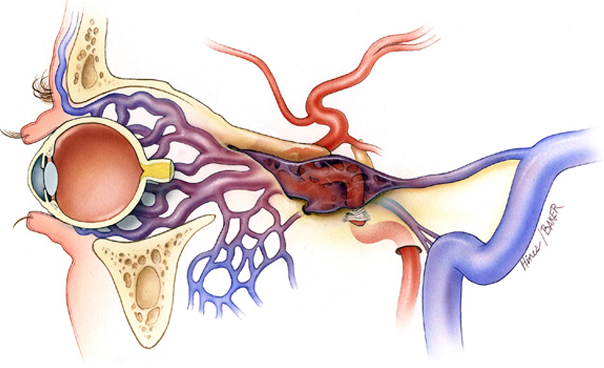 What causes a Carotico-cavernous fistula?

Cerebral trauma accounts for approximately 75% of carotid-cavernous sinus fistulae, with motor vehicle accidents, fights, and falls representing the most common settings. The injuries may be penetrating or nonpenetrating and may be associated with basal or facial skull fracture.

What are symptoms of Carotico-cavernous fistula?

Clinical presentation is consequence of the elevated intracavernous pressure. Moreover, other factors like dominant pattern of venous drainage, the size and location of CCF and the presence of collateral vessels (arterial or venous) are important in this setting. For example, principal drainage into superior and inferior ophthalmic veins present with orbital symptoms.

In direct, high-flow CCF´s, symptoms appear suddenly. The Dandy´s triad (pulsatile exophthalmos, bruit and chemosis) is not completely observed in all patients, and is accompanied by other clinical features (diplopia, pain, cephalic bruit, ophtalmoplegia, visual loss). Visual loss is one of the most feared complications and requires immediate treatment.

Regarding indirect CCF´s, the onset of symptoms is not as sudden as direct CCF and progess insidiously, showing progressive glaucoma, proptosis or red eye. 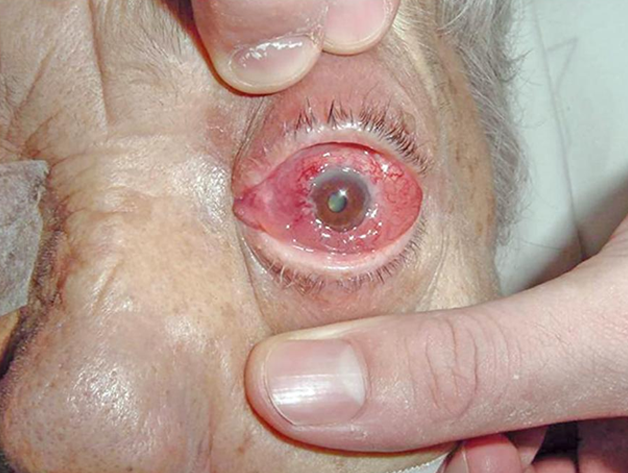 How to diagnose a Carotico-cavernous fistula?

CT and MRI are the preferred non-invasive imaging techniques in diagnostic approach of CCF.

MR images show similar findings to those seen on CT; also depicts orbital edema, enlarged pituitary gland (due to venous congestion) and abnormal flow voids in CS that correspond to shunted blood. Furthermore, is useful in screening and follow-up.

In the setting of a high-flow fistula and retrograde cortical venous reflux, MR or CT studies may reveal dilatation of leptomeningeal and cortical veins.

Digital substraction angiography (DSA) is used to obtain the following information: • Size and location of the fistula. • Characterize them as direct or indirect. • To identify associated cavernous carotid aneurysms. • Presence of complete or partial steal phenomena. • Identification and confirmation of patency of outflow pathways of the CS. • Assessment of cortical arterial circulation and collateral flow through circle of Willis. • Identification of high-risk features (cortical venous drainage, pseudoaneurysm, CSvarix). • To depict venous drainage patterns, therapeutic route, associated vascular injuries and evaluation of carotid bifurcation before compression therapy.

What are Treatment options for a Carotico-cavernous fistula?

In the last years, it has been developed several therapeutic options in management of CCF. The endovascular approach has become the first-line option in clinical emergencies, being used in symptomatic direct CCF´s and indirect fistulas with progressive symptoms (visual loss, dangerous drainage pathways). The treatment is chosen according to the type and anatomy of the fistula, size of arterial defect and operator/institution preferences.

The goal of treatment in direct CCF is to occlude the tear betweenICAand CS, preserving the patency of ICA, whereas in indirect CCF the goal is to interrupt fistulous communications and reduce CS pressure.

Balloon Occlusion: This procedure requires that the CS must be large enough to put the balloon for embolization and the size of fistula must be smaller than the inflated balloon, but large enough to allow a deflated balloon. The balloon has the advantage of being able to be flow-directed through the fistula and CS, and must be inflated to a volume larger than the fistula orifice to prevent its retrograde migration into ICA. Later, angiography is repeated to ensure closure of the fistula and patency of the ICA.

Transarterial embolization: In the last years it has become the mainstay of treatment in high-flow direct CCF´s. Also, it’s an alternative when residual AV shunt remains in dural CCF. Embolization can be made with detachable platinum coils and liquid embolic agents (n-butyl cyanoacrylate, ethylene-vinyl alcohol copolymer); the first are preferred because of their reliable and controlled deployment into CS. Complications of this procedure includes thromboembolus and ICA dissection.

Covered stent graft placement: Can be useful to obliterate direct CCF´s,whilepreservates ICA patency. Actually their use is limited.

Transvenous embolization: Is the current method of choice in treatment of indirect CCF´s. the goal of this technique is to catheterize the abnormal CS superselectively and occlude the fistula without rerouting venous drainage to cortical structures. This can be made in several routes; the most used is through inferior petrosal sinus (IPS)

There are other alternative routes, including facial vein and SOV, trans-contralateral CS, superficial middle cerebral vein and sphenoparietal sinus, pterygoid plexus and direct transorbital puncture of CS via the superior orbital fissure.