A stroke, often called a “brain attack,” is a medical emergency caused by either too little or two much blood flow to the brain. It’s the leading cause of death and common cause of neurological disability. Strokes are serious neurological emergencies that need to be treated immediately.
There is more than one type of stroke:
A transient ischemic attack (TIA or “mini-stroke”), caused by carotid occlusive disease, carotid artery stenosis, or other conditions that prevent the brain from receiving the amount of oxygen it needs

An Ischemic Stroke is caused by a more severe blockage in a blood vessel, and is more serious than a TIA. Ischemic stroke is most often caused by advanced carotid occlusive disease, in which a clot forms in a narrowed artery and completely blocks the flow of blood to the brain (called thrombosis). The clot may break off from the narrowed artery and block an artery deeper in the brain (called an embolism). An ischemic stroke may also occur when a blood clot forms in the heart or other part of the body, ultimately preventing blood flow to the brain.

Ischemic stroke is more common than hemorrhagic stroke, and it generally occurs in those over 60. Risk factors for stroke include hypertension, high cholesterol, smoking, diabetes, drug and alcohol use, and a sedentary lifestyle.

What are symptoms of a stroke?

The symptoms of a stroke include:

If a person cannot lift both arms overhead, or cannot smile with both sides of the mouth, a stroke should be suspected. Get immediate medical help, even if the symptoms seem to get better or even go away. Time is of the essence with stroke, with the best outcomes if treatment starts within the first few hours after the stroke.

How is a stroke diagnosed?

Strokes happen fast and will often occur before an individual can be seen by a doctor for a proper diagnosis. For a stroke patient to get the best diagnosis and treatment possible, they should be treated at a hospital within 3 hours of their symptoms first appearing. Ischemic strokes and hemorrhagic strokes require different kinds of treatment.Unfortunately, it is only possible to be sure of what type of stroke someone has had by giving them a brain scan in a hospital environment.

There are several different types of diagnostic tests that doctors can use to determine which type of stroke has occurred:

What is treatment for Ischemic Stroke?

Ischemic strokes are caused by the blockage of an artery, which deprives the brain of oxygen. If an individual experiences a mild ischemic stroke, and is treated within three hours of when symptoms begin, doctors can administer the “clot-busting” medicine called t-PA to dissolve the blockage. For patients who do not arrive in the hospital in time for this treatment, or whose strokes are moderate or severe, there are surgical options for removing the clot and restoring blood flow to the brain.

Mechanical embolectomy is an advanced, minimally invasive treatment designed to remove a blockage in the blood vessel. Mechanical embolectomy devices may be used many hours after the onset of stroke symptoms (up to eight, sometimes even 12 hours), although each passing hour reduces the benefits of treatment while increasing its risks.

There are several devices that may be used for a mechanical embolectomy: the Penumbra device works by macerating the blockage (basically chewing it up into pieces) and then removing the pieces.  Stentrievers (such as the Solitaire and the Trevo) are designed to remove the blood clot as a whole. 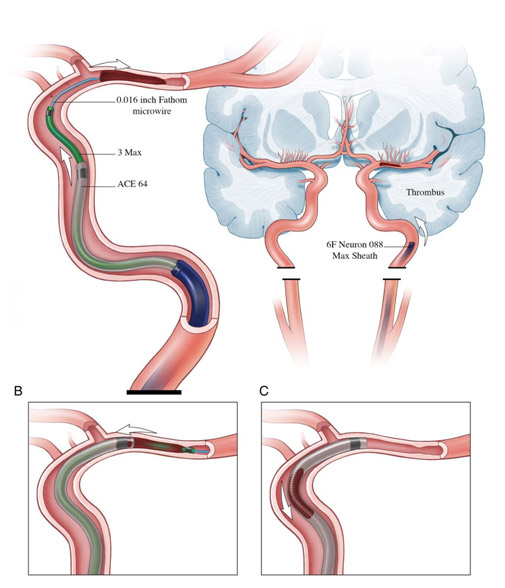 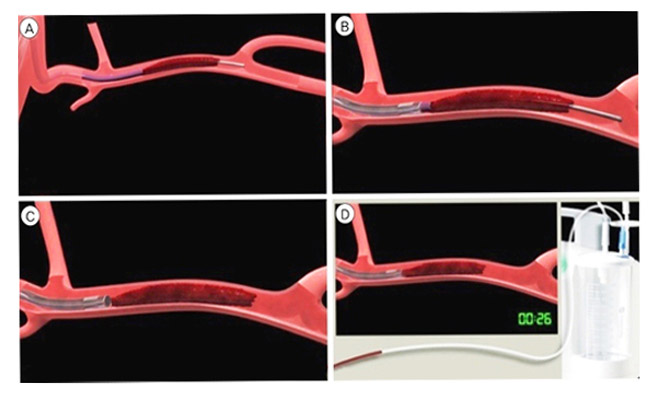 What has been the role of interventional radiology in stroke treatment?

Recentlymultiple randomized clinical trials have shown that endovascular therapy with mechanical thrombectomy is highly beneficial, as compared to intravenous tPA alone or more conservative therapies, in select patients with acute ischemic stroke and moderate to severe neurological deficits due to a proximal cerebral artery occlusion. These quality outcomes-based findings— along with improved patient selection criteria, refined imaging and device technology, and a heightened awareness of the importance of time—have demonstrated improved outcomes for stroke patients.

Early Alteplase IV r-tPA followed by mechanical stent thrombectomy is the new standard of care for patients who qualify. Alternate interventions are also beneficial for patients who do not qualify. Rapid intervention is critical to successful treatment. Interventions without general anesthesia are associated with a better outcome. Systems of care are being organized to facilitate the delivery of this care.

If you had a stroke, wouldn’t you want the best treatment available?

The best chance a person has for recovering from a large vessel occlusion stroke is if the artery is opened up very quickly. Endovascular treatment is the best possible treatment for this dangerous type of stroke but fewer than 1 percent of patients actually receive it.

Join the Stroke campaign and pledge your support to help patients Survive Stroke.Together, we can strengthen stroke systems of care so that patients nationwide have the best possible chance for a full recovery.
To proceed further Please SMS your valid email id and mobile no to 9930119960.